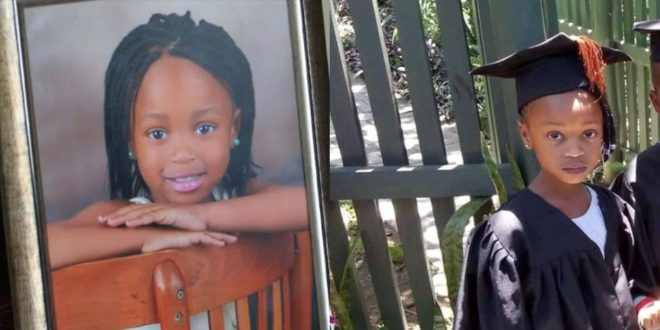 A SIX-year-old girl identified as Inathi Mhlahlo has been raped and murdered by unknown wicked men in a bizarre manner in South Africa.

The little girl disappeared on Monday, October 26, after she was given permission to go buy sweets and crisps from a local shop.

Until her mother, who had been working all day returned home and the owner of the shop claiming he had not seen her at all, they weren’t concerned little Inathi Mhlahlo failed to return. “We began to panic and did not know what to do,” The girl’s aunt, Paphama said.

five hours after they realized, The child’s body was found stripped of underwear (indicating signs of rape) with a stab wound to her neck after Friends and neighbors embarked on a frantic search.

According to her mom, she had a call and they informed her they found her little girl, failing to add her condition. “They could not tell me what happened, but I knew my child was dead.”

Inathi Mhlahlo was rushed to hospital but was tragically pronounced dead on arrival. Her mother has recounted her last conversation with her. “In our last conversation, she said I should surprise her with a present. This hurts.”

She went on to reveal her little girl’s dreams and goals when she goes older.  “She wanted to be a model or a doctor. When she wanted something from me, she called me chommie(pal), not Mommie.”

Meanwhile, there have been no arrests made since the horrific murder of the girl but the police have launched a thorough investigation.

“Detectives are hard at work investigating the rape and murder of the six-year-old girl” Said Captain Khaya Tonjeni of the local police force. “Crime scene experts are combing the scene, looking for clues that could help us with the investigation of Inathi Abukwe Mhlahlo’s murder.”