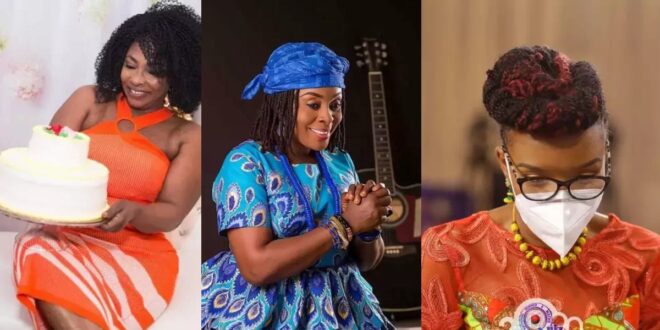 5 Ghanaian female celebrities who look younger than their age (photos)

Age is truly nothing but a figure, research suggests. Now, we are introducing five Ghanaian Female Celebrities to you, who define beauty and show that age is just a number indeed.

Rose Akua Ataa Mensah, popularly known in showbiz as ” kyeiwaa” is an actress born in Ghana. After playing the ideal role of a witch in a movie, she got her nickname ‘kyeiwaa’.

She is in her late fifties. Rose mensah is no longer in the movie business now. She also appeared in many other movies, such as Akonaba, Abrebrese, Cross Path, Money and Death Code, etc. On December 25, 2011, she won the ” Best Actress in supporting role (local language) on December 25, 2011″ at the second edition of the Ghana Movie Awards. She still sparkles even at age 57.

In the USA, she had just remarried.

She was also the first female recipient of the National Society of Black Engineers (NSBE2018 )’s Golden Touch Award for Foreign Academic Leadership at the 44th Annual Conference in the United States of America. She is in her 50’s, but also glowing.

Akosua Agyapong is a Ghanaian female high life singer and a TV star who is well to do. She was born in Accra on November 17, 1959. She is 61 years of age today. She is well-known for her hit tracks, ” Eka bi Nie, Frema, Meye Obaa” .

The beautiful Kalsoume Sinare is an actress from Ghana and a former model. At the 1990 Miss World pageant, she represented Ghana and frequently appeared on television as a promotional model for consumer goods. She has starred in more than 50 films in the drama genre, including Trinity, Babina, Sala, etc., for which she won a Golden Actress Award. She is in her fifties.