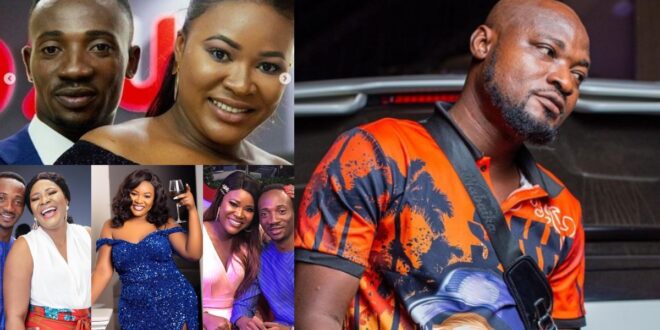 “Aboa! you beat your wife and you want to advise me”-Funny face blast Salinko (video)

Funny Face, has blasted his fellow actor, Salinko, after he made a video urging him to avoid insulting his colleagues and police in Ghana.

Since Funny Face was released from police station for unlawfully shooting of gun in the air in Kasoa, very few of the celebrities have reacted.

.Even though he was treated badly by the police in the viral video when he was detained, very few of his colleagues spoke about the issue and that made him tag them as hypocrites.

Well, as funny face filmed the video and posted it on his Instagram page, his fellow actor Salinko joined the few who referred to his police brutality issue.

Salinko stated that it was not correct what the Ghanaian police did to Funny Face, adding that they should have at least chosen the lawful route to apprehend him.

However, Salinko schooled Funny Face to desist from pouring insults on the Ghana Police since not all of them were involved in the matter of his arrest and so generalizing and criticizing them might get him a new serious case.

Again, though they have not spoken about how he was manhandled, Funny Face has tagged his fellow actors as hypocrites.

In answer, Salinko instructed Funny Face to also refrain from saying those stuff.
Funny Face, though, seems to be quite insulted by certain statements made in the advise by Salinko as he came out to blast him in rage.

According to Funny Face, who was angry when Salinko claimed he was his little boy despite assisting himself in the industry, funny face said that Salinko came to meet him in the industry  so he should not belittle him.

Salinko even criticized Funny Face for certain actions that contributed to his detention, such as shooting a pistol, and in retaliation, Funny Face mocked him to the point of almost exposing some secrets regarding him using unprintable words.