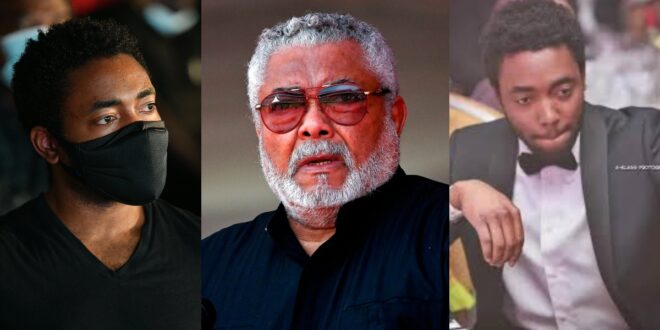 The Late Jerry John Rawlings described his son Kimathi as stupid check out why.

The only son of the late Jerry John Rawlings has described a near-death incident in which his father called him stupid.

Kimathi Agyemang Rawlings mentioned in his Homage to his father the tale of a visit he and some of his friends had made to the Ada Beach resort.

According to him, his youthful exuberance prompted him to dive too easily into the water.

“Before leaving, you gave us your blessing, recommending that we take one of your best swimmers as security. After 30 minutes of travel up the lake, we arrived at the Ada Beach with all it beauty. Without hesitation, we dived in before the security could advise against it, heading out the floor bed had no contact with our feet, Unknown best to us, the current has drawn us out at least 40 meters offshore and amidst the Tumultuous waves, the fear in our appointed lifeguard was enough to let us know every stoke back to shore would be the difference between life and death”

“If a man loves you, he will wait after marriage before sleeping with you”- Bishop Agyinasare

He claims he got home to find that his father already knew. In his father’s terms, he said “I didn’t think you were stupid enough to swim in that part of the beach”.