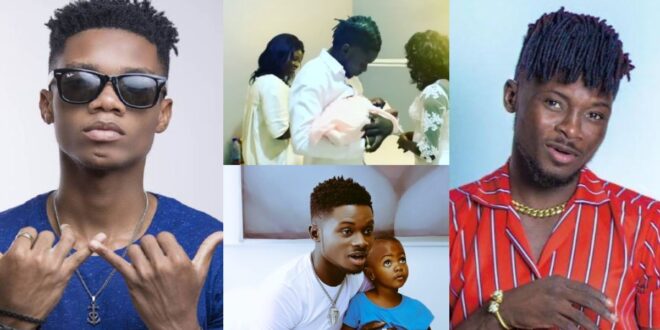 “Kuami Eugene has a lot of Children, he doesn’t show them on social media”- Kidi

Kidi of Lynx Entertainment answered Kuami Eugene for asking him he is not serious and should marry his baby mama.

The birthday of Kuami Eugene was celebrated in the Ghanaian entertainment sphere on February 1, 2021.

Kuami Eugene, in a chat with Abeiku Santana at Okay FM, replied to Kidi’s birthday message asking him to marry.

Kuami Eugene told Kidi that he had to be serious about marrying because he was older than him and had a son with someone else’s daughter.

“Kidi is not serious, he should marry his baby mama” Kuami Eugene said on live radio

Today, Saturday, February 6th, Kidi was in an interview with Abeiku Santana on Okay FM, and he responded to Kuami Eugene’s statement that he was not serious about impregnating someone’s daughter without marrying her.

ALSO READ  Building A Fanbase Like SarkNation, SM And BhimNation Is Not Easy - Kidi Reveals

“I Use to be a weed smoker”- Prophet Nigel Gaisie

Kuami Eugene has a lot of children, according to Kidi, only because he kept them away from social media.