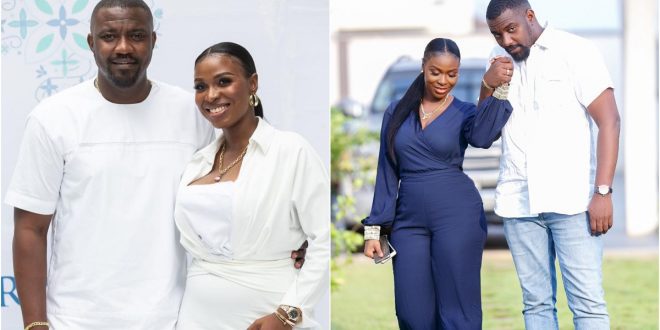 The marriage between John Dumelo and Gifty Mawunya came as a shock to many Ghanaians as the two kept their relationship very secret and not a single media outlet reported about them before their marriage.

They tied the knot in an exclusive traditional wedding at Royal Senchi Resort in Akosombo and they are blessed with a son who was born on 16 October 2018.

Despite the unfamiliar relationship that was between the two before they married, their marriage has been flourishing from grace to grace and it is based on certain factors we hope to share with you.

our team dug deep into the backgrounds of the couples and we came out with some facts that they have in common, believed to be the strength for their marriage.

Check them out below:

1 both from the same political party before meeting

John Dumelo and Gifty Mawunya are both strong members of the NDC. While John Dumelo is contesting to become a Member of Parliament for Ayawaso West on the ticket of the NDC, Gifty’s family members are also strong NDC members and enjoyed contracts when NDC was in power.

Gifty and president John Mahama are seen hanging out a couple of times and she is almost always present at all those parties held at the Jubilee House when JDM was on the throne.

2. they are Both same tribe

Though marriage has nothing to do with tribe or ethnicity, parents always wish their children marry from ‘home’ to reduce conflicting of ways of life between the couple which may result in marriage break down.

John Dumelo and his wife Gifty are both Ewes from the Volta Region of Ghana.  Dumelo spiced up their marriage with the Ewe language when Gifty was celebrating her birthday in January 2019.

John Dumelo wrote in Ewe which translate into English as below :

“God bless today @Missgeeonly, A queen was born. May God bless you and protect you. May he make all your heart desires come to pass. I hide you in the holy blood of Jesus Christ. Thank you for being a good wife and a good mother. I love you. Happy birthday!!”

The couple both have very good educational backgrounds and as elites, they will be able to gear their marriage in times of struggle. Gifty Mawunya holds at least two bachelor’s degrees from well-known Universities in Ghana.

John Dumelo on the other hand studied Civil Engineering at Kwame Nkrumah University of Science and Technology. and later enrolled in GIMPA’s School of Public Service and Governance.

4.They have a common mutual friend

Actress Nadia Buari is a good friend of both John Dumelo and her wife Gifty Mawunya even before they started dating. Some have even speculated that Nadia Buari connected the two(Gifty and Dumelo). Gifty and Nadia are always seen together anytime in town. The two friends hang out a lot and they seem to be so fond of each other.