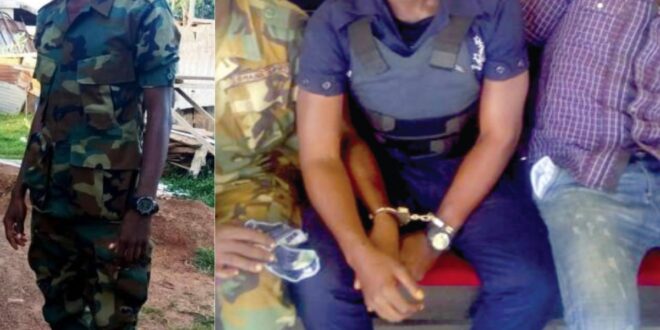 30 years old Cpl Offei Richard Okyere who is a military man has been arrested by the military police and presented to the court for allegations that he defiled a 14 years old minor.

The little girl who was the victim is the daughter of his close friend.

The prosecutor of the case, Detective Sg. Opoku Aniagyei presenter the case which was presided over by Adelaide Abui Kadey.

According to the prosecutor, the accused and father of the victim were stationed at the same Regiment at the Burma Camp.

Richard use to visit the home of his friend but when he was not around, Richard lures his 14 years old daughter to have sex with her.

According to the prosecutor, these shameful acts happened more than once between July 2020 to September 2020.

The crimes of Richard Okyere came public after the elder sister of the victim, asked her if she was a virgin of which she denied, her father managed to get answers out of her as to who broke her virginity, that was when she narrated what has been happening between her and Richard Okyere.

The father took the case to the military police who took swift action and arrested Richard.

The little girl has been sent to the hospital to be examined and the results will be presented to the court as evidence.