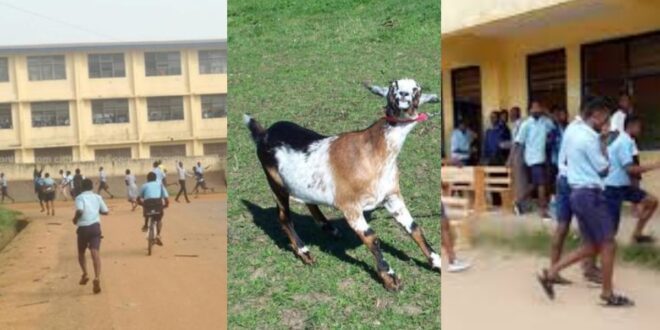 A letter has appeared on social media containing details about the removal of three students from the boarding house at Adventist Senior High School in Kumasi.

Their crime was taking their housemaster’s goat and celebrating Christmas with it.

According to the letter, three students from Paul Nsiah House, Kwarteng Edward, Osei Kwabena Afriyie, and Oppong Davis Owusu, all vowed to rob the goat, which they did.

They confessed to the crime after being apprehended and replaced the goat with a skinny one.

They were deboarded as a result of their conduct, and they were required to purchase the goat before returning to class.

The letter said that “if they are spotted somewhere outside the boarding house without authorization, they will be suspended indefinitely.”

The letter signed by Headmaster Ernest Kofi Gyimah does not have a date. And, based on the presentation of the document, it seems to be very ancient. We don’t know if this happened lately or a long time ago.

However, social media users are taken aback by the ‘3 students’ self-assurance.