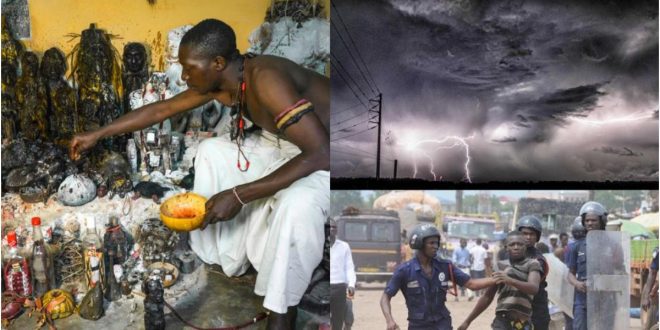 Two fetish priests were nearly executed on Wednesday 20th May 2020 for preventing rain from falling in Penyi, a town near Dzodze in the Ketu-North municipal assembly but for Police intervention. They are now arrested and in police custody

According to natives around, these two fetish priest has caused Famers great lot in that village with their rituals as they hide secretly whenever the clouds forms to pour down rain to prevent it from raining.

Penyi and its neighboring towns have not witnessed any rainfall in the past months despite numerous instances of the cloud being heavy with rain.

This triggered traditional leaders in the town to do open consultation of the gods and as a result the name of the two spiritualists was revealed by the chief priest.

Angry mob upon hearing the secret behind their long waited rainfall stormed the shrines of these priests. the Priests were heavily beaten and they admitted their evil acts which they said they have been doing for quite a long time now.