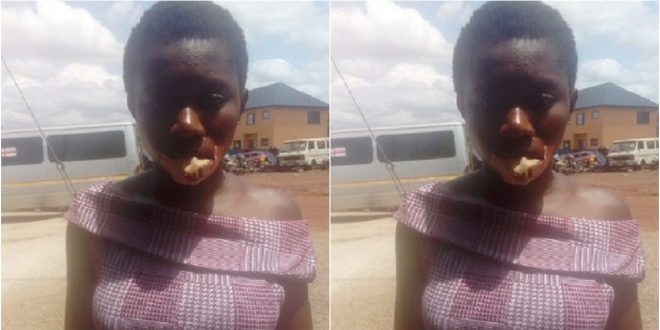 Both girls are in form 2 in their respective schools.

The victim, Ellen told reporters that she does not know what she has done to the suspect Itikan, and ever since her family relocated to Bohyen.

On Wednesday, May, 13, this year, Itikan allegedly rained insults on the victim and her younger sister all day and vowed to beat the two sisters wherever she met them.

On the same day, the victim narrated that she was attending to natures call when she saw the suspect insulting her younger sister.

“I collected 50 pesewas from my mum to attend to the call of nature and when I got out, I saw Itikan insulting my sister so I told her to escort me to the toilet. As soon as I said this, Itikan called me ‘sickler, you are the one I am looking for,” she recounted.

Ellen said before she could say anything she was pounced on by the suspect and beaten all over whiles the suspect’s mother stood by and watched.

“I felt a sharp pain on my lower lips and when I said ‘Itikan has bitten off my lips, the suspect’s mother told me she wished her daughter had chewed off my mouth’,” the victim alleged.

The victim was later rescued by her elder brother, Richard Amoah, who rushed to the scene.

Ellen was taken to County Hospital at Abrepo for treatment, after which her brother made a complaint to the police concerning the issue.

Both the suspect and the victim has been taken and been investigated.