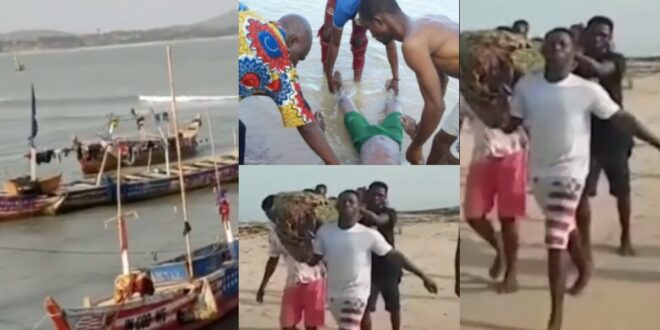 15-year-old boy who survived Apam Drowning speaks on what happened to them.

A 15-year-old boy has described the terrifying experience of escaping death after several children mysteriously drowned in a sea at Apam in the Central Region.

The child, known as Kwasi Abbrew, described how he survived the ordeal after being swept ashore by a powerful tidal wave.

“We were over 25 when we were swept away by the waves, and we tried to swim back, but we discovered that some of our mates had already been carried away by the tidal wave,” he said.

The youngsters, whose exact numbers are unknown, are said to have drowned on March 8, 2021, after flocking to the sea in large numbers to swim despite the coronavirus pandemic’s swim ban.

It happened about 6 p.m., when children aged 14 to 17 years old allegedly used an illicit path through a lagoon to get to the location.

The kids, aged 14 to 17, were swimming when a strong tidal wind blew, drowning them and carrying their bodies away.

Young Abbrew, who has yet to recover from the disaster, said they were acquainted with the location in an interview with Adom News.

However, he said that they were struck by a powerful tidal wave, and that through their best efforts, some of them did not survive.

“We usually go to the area to swim on Sundays, but what happened shocked me. The second tidal wave was more dangerous, as it swept away the majority of our friends,” he said.

Meanwhile, Apam’s leader, Nana Ekow Payne, has revealed that the children may have committed some heinous deeds that enraged the gods.